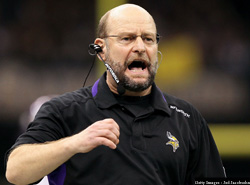 Think the Vikings solved their in-house problems with a stunning, late-game turnaround against the Cardinals, which saw a 14-point deficit erased and a three-point win achieved in overtime?

Former Vikings beat writer Sean Jensen of the Chicago Sun-Times, who now covers the Bears, writes in advance of Sunday’s game between the two teams that the Vikings remain chilly toward Childress.

“We know that Childress doesn’t have our backs, so
why should we have his?” one player told Jensen.  “We’re playing for us, and
we’re winning despite
him.”

“He has absolutely no people skills,” another team source said regarding Childress.

Per Jensen, Childress’ post-game rip of quarterback Brett Favre following a narrow loss to the Packers pissed off more players than Favre.  “For a lot of guys, that was a turning point,” an unnamed player told Jensen.

And while three players told Jensen that they supported the controversial decision to get rid of receiver Randy Moss, they’d apparently like to see Childress go, too.

“As much as I hate Childress,” another unnamed player said, “I will keep playing.”

And Childress will keep coaching.  As long as the Vikings keep winning.