It took some researching, but one positive can be drawn now as it relates to the Jets and their meager quarterback situation.

Pro Football Talk collected data over the past decade to analyze how each NFL franchise has approached the quarterback position in the draft. The Jets selected an NFL-high seven over that span, including one in each of the past four drafts. Two of those four, Geno Smith a New York Giant and Tajh Boyd out of the league, are no longer with the club.

It is, of course, tongue-in-cheek to characterize this activity as “positive”; inserting rookies into a huddle and seeing who sticks isn’t an ideal spring rite of passage. Jets GM Mike Maccagnan recently allowed the team may take another dive into the 2017 quarterback class. Josh McCown currently sits atop his depth chart.

Mark Sanchez in 2009 is the Jets’ lone first-round quarterback in the past decade.

The Broncos drafted the second-most quarterbacks with six. Two were first-rounders: Paxton Lynch in 2016 and Tim Tebow in 2010.

The Browns are one of six teams to have selected five since 2007. No organization, however, has invested more in rookie quarterbacks during this period. Each of Cleveland’s five QBs was taken during the draft’s first three rounds. Johnny Manziel, Brandon Weeden and Brady Quinn were all first-round picks.

New England seems to have a preference for when it goes quarterback.

Of the five Bill Belichick drafted in this 10-year span, four were taken in the second or third round.

No team recently has invested less in a rookie quarterback than the Chargers. Despite scouting the position heavily, they are one of five teams to have selected an NFL-few two quarterbacks the past 10 years. Brad Sorensen in 2013 and Jonathan Crompton in 2010 were seventh- and fifth-round picks, respectively. Neither remains on the roster.

The Texans and Bears, despite a current need, have drafted just three quarterbacks in 10 years. Tom Savage in 2014 is Houston’s only such pick the past five drafts. All three of the Bears’ selections came in the fifth and sixth rounds. San Francisco hasn’t drafted a quarterback before the sixth round in five straight years.

A franchise that drafts several quarterbacks but hits on none is not rewarded for its effort.

The Jets can attest to this.

They’ve invested in a rookie quarterback year after year, hoping at some point someone will come along to fill their vacancy for good. But when that doesn’t transpire, a year passes, and the franchise finds itself in the same situation as it did a year before.

So here they are, beside other teams, sifting through a market for what can seem a mythical good. 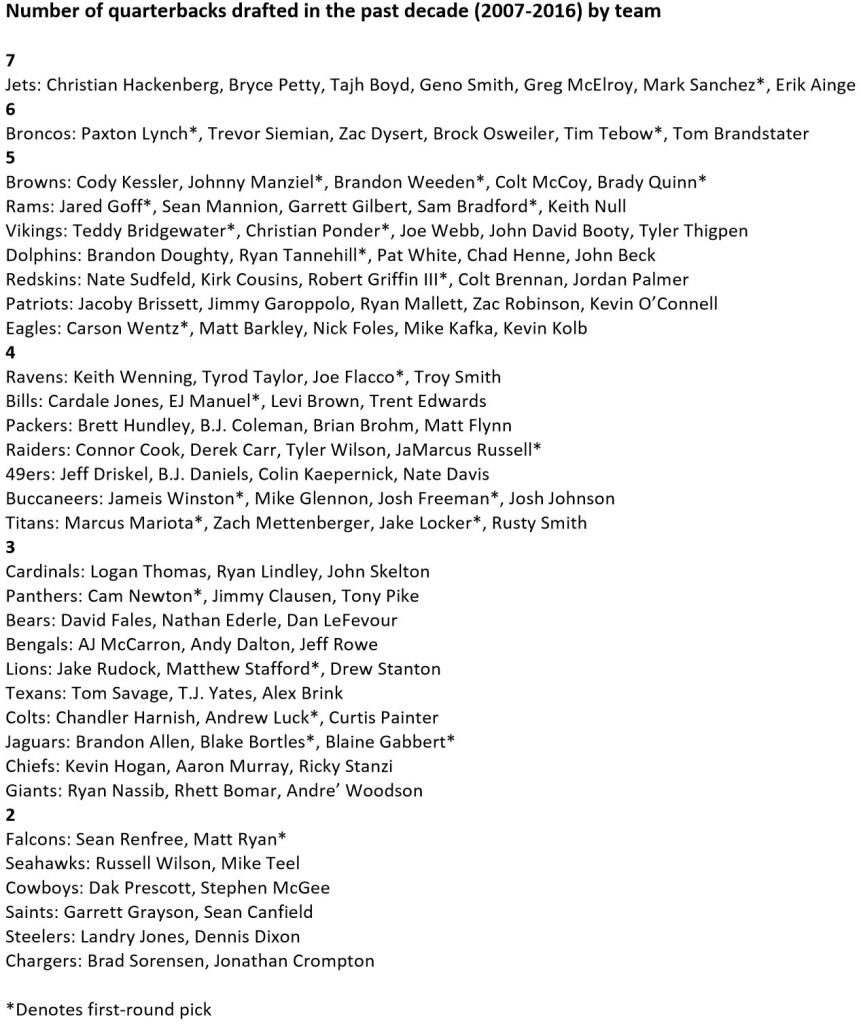